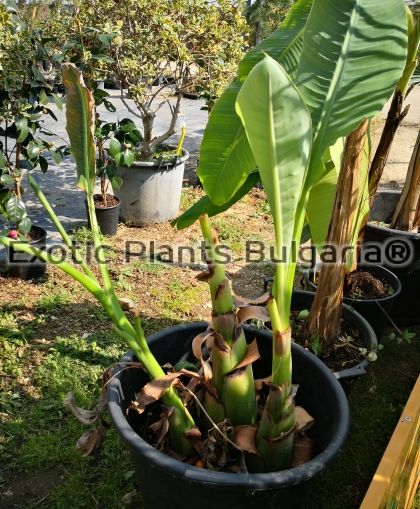 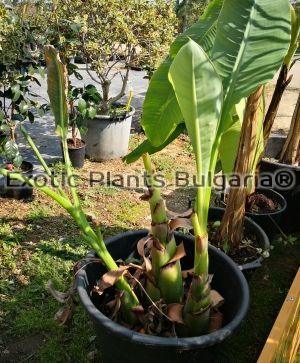 Musella lasiocarpa 'Chinese Yellow'- At one time this rare banana was thought to be extinct in the wild in its native Yunnan, China, home. Its butter-yellow inflorescence is unmatched in show. Bracts are stiff and waxy and may last up to nine months on the plant. On some plants, 2 or 3 inflorescences are produced. Because of its temperate origin, it may prove very hardy, but it remains to be widely tested. It produces small, fuzzy, rounded, nearly flat, seeded and inedible bananas. Highly recommended for unique flowers, foliage, and form. Clumps tightly, does not run. Prices drastically reduced from last year as propagation has increased numbers.

The Chinese dwarf banana (Ensete lasiocarpum), also known as the golden lotus banana, is a plant of the Ensete genus. It is thus a close relative of bananas, and also a member of the Musaceae family. The plant is native to the Yunnan province in China, where it grows high in the mountains up to an altitude of 2500 m. It is known for its yellow erect flower (see image), generally appearing during the second year of cultivation, that can last a few months. Just before opening, the flower resembles a lotus - from which the plant gets one of its names. In 1841, the United States Department of Agriculture introduced Chinese dwarf cooking-bananas to Florida, but there was little interest among consumers at the time.